In the latest wave of new openings in the culinary revolution currently occurring in and around Dalston, Pond has now washed up on our doorstep. The remit of this new contender is serving what is apparently the ‘toast of the US dining scene’.

It is in actual fact Hawaiian cuisine which i’m sure wouldn’t be an altogether unsuccessful concept if it were executed elsewhere and by a different chef – unless you’ve missed the subtext, the food was poor.

Located in the dodgy end of Gillett Square – on approach you may feel slightly out of place unless drinking neat rum or Guinness from the bottle, so I would suggest you do both as it will soften the blow of paying the bill at this place.

Aesthetically Pond Dalston ticks all the right boxes, it’s on trend with it’s industrial exposed brickwork, warehouse location and funky Hawaiian shirts adorning the pretty staff. Being thoroughly enamored with the vibe I felt I needed to relieve the excitement with a trip to the little boys room. It was upon viewing the toilet bowl that my excitement faded and I decided against draining the weasel – the old chap has seen some sites in it’s time but this porcelain was straight out of a halls of residence.

With a full bladder I felt it best to heighten my discomfort so obviously turned to the cocktail menu, an experience that was altogether positive, if not a little sweet for my pallet. I kicked things off with a ‘Tinglet’ which is based on a homemade cordial of Ting. The world is a better place with Ting ‘innit, so this beverage received rapturous applause. 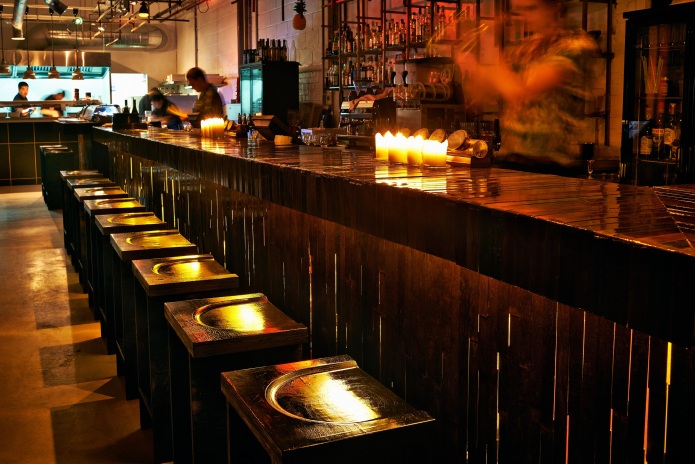 Moving through to the restaurant we were given our menus which were secreted in a National Geographic magazine – nice touch, very Dalston. I took to the helm with ordering and for a table of four, ordered a couple of dishes from each section of the menu.

From the small plates section we opted for the Kalua Pork (£9.80) and the Fillet Poke (£10.20). Both of which were thoroughly unpleasant. The pork reminded me of fowl that had been frozen, thawed out and microwaved and was served with a green sauce that had the texture of baby food but sadly not the taste…it had no taste. The texture of the Fillet Poke was halfway between fat and gristle – a poke in the eye would have been preferable.

I also ordered us a selection of sushi rolls, which were rather good, and to their credit they served kizami wasabi which is a version of fresh wasabi which provides great depth of flavour and offers a good accompaniment to the rolls. Sashimi here is best avoided. It wasn’t the most unpleasant flavour we had that evening but it was tasteless and not the best quality.

Other lowlights included the Smokin Cow (£21.00) beef ribs which were dryer than the Sahara and the Sambal Black Cod (£23.50) which hadn’t been de-boned and nearly sent me to an early grave.

Accompanying our meal I had a few glasses of crisp South African Chenin Blanc which was a good pairing, but the rest of the list really ought to be reviewed. It lacked any kind of thought and was limited and overpriced. They have no bottom range in the list, so those on a budget will struggle to find a wine.

The service here at Pond really ought to get a mention, as it was fluid and consistent and punctuated with some good banter – I was slightly perturbed when I initially saw the bar staff perusing the latest edition of National Geographic, however hindsight demonstrates that this was a willingness to swot up on the menu, rather than a keen interest in the Amazonian Bull Frog.

Named Pond as a reference to hopping over the Atlantic to the UK, I think it an appropriate title, as i’m quite sure this restaurant will go the way of the Titanic on it’s fated trip over the pond and sink without a trace.